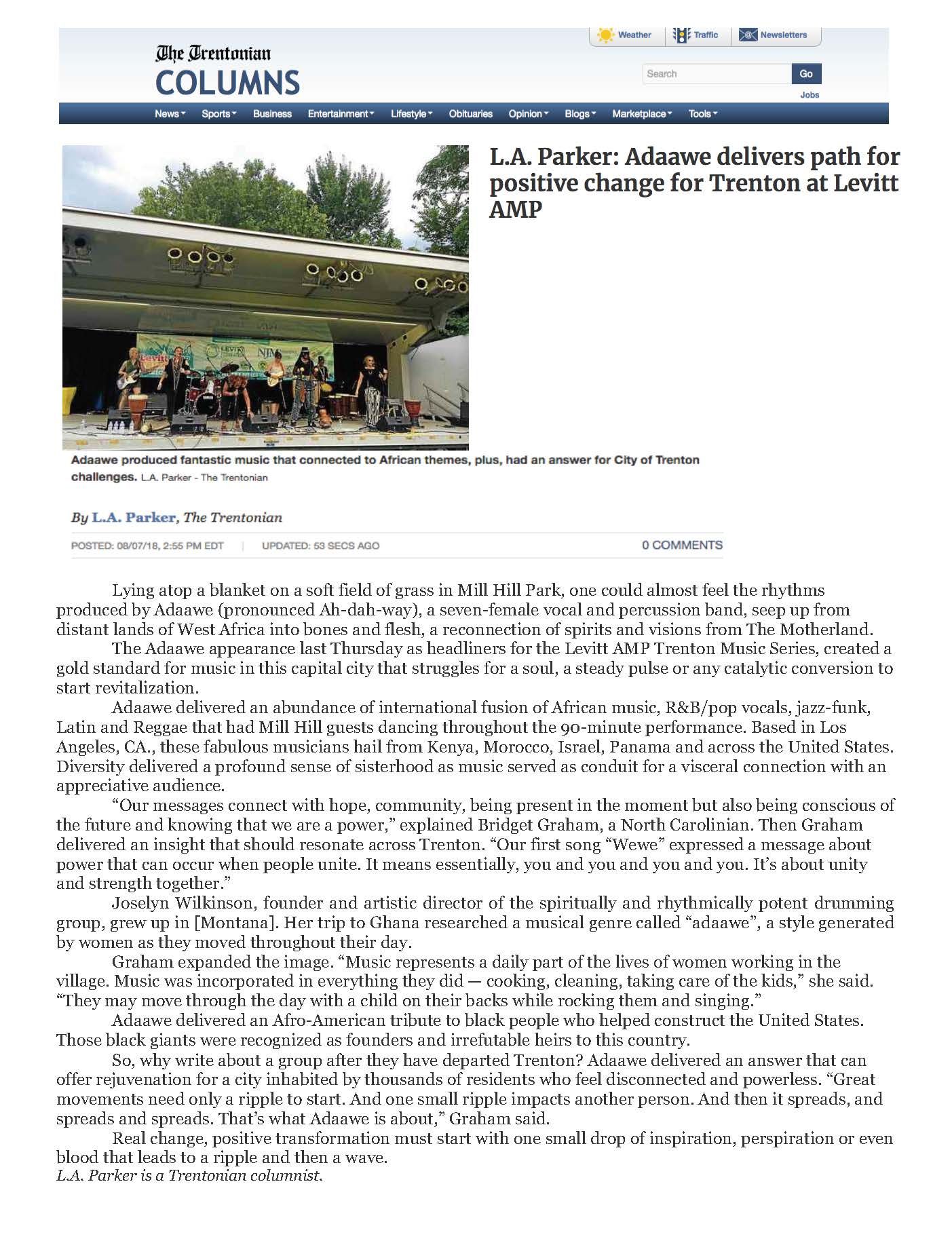 Lying atop a blanket on a soft field of grass in Mill Hill Park, one could almost feel the rhythms  produced by Adaawe (pronounced Ah-dah-way), a seven-female vocal and percussion band, seep up from  distant lands of West Africa into bones and flesh, a reconnection of spirits and visions from The Motherland. The Adaawe appearance last Thursday as headliners for the Levitt AMP Trenton Music Series, created a  gold standard for music in this capital city that struggles for a soul, a steady pulse or any catalytic conversion to start revitalization. Adaawe delivered an abundance of international fusion of African music, R&B/pop vocals, jazz-funk, Latin and Reggae that had Mill Hill guests dancing throughout the 90-minute performance. Based in Los Angeles, CA., these fabulous musicians hail from Kenya, Morocco, Israel, Panama and across the United States.

Diversity delivered a profound sense of sisterhood as music served as conduit for a visceral connection with an appreciative audience. “Our messages connect with hope, community, being present in the moment but also being conscious of the future and knowing that we are a power,” explained Bridget Graham, a North Carolinian. Then Graham delivered an insight that should resonate across Trenton. “Our first song “Wewe” expressed a message about power that can occur when people unite. It means essentially, you and you and you and you. It’s about unity and strength together.”

Joselyn Wilkinson, founder and artistic director of the spiritually and rhythmically potent drumming group, grew up in [Montana]. Her trip to Ghana researched a musical genre called “adaawe”, a style generated by women as they moved throughout their day. Graham expanded the image. “Music represents a daily part of the lives of women working in the village. Music was incorporated in everything they did — cooking, cleaning, taking care of the kids,” she said. “They may move through the day with a child on their backs while rocking them and singing.”

Adaawe delivered an Afro-American tribute to black people who helped construct the United States. Those black giants were recognized as founders and irrefutable heirs to this country. So, why write about a group after they have departed Trenton? Adaawe delivered an answer that can offer rejuvenation for a city inhabited by thousands of residents who feel disconnected and powerless. “Great movements need only a ripple to start. And one small ripple impacts another person. And then it spreads, and spreads and spreads. That’s what Adaawe is about,” Graham said.

Real change, positive transformation must start with one small drop of inspiration, perspiration or even blood that leads to a ripple and then a wave.

L.A. Parker is a Trentonian columnist.